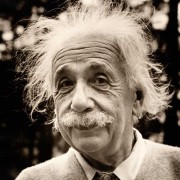 “As a human being one has been endowed with just enough intelligence to be able to see clearly how utterly inadequate that intelligence is when confronted with what exists. If such humility could be conveyed to everybody, the world of human activities would be more appealing”.

Unlike many Einstein quotes, this one is attributable, he wrote it in correspondence to Queen Elizabeth of Belgium in 1932. It gently warns of the dangers of intellectual arrogance and the desperate drive of mankind to be able to explain everything. If such an intellectual colossus felt such humility in the face of what is, there is surely an example for the rest of us.